Help The Environment And Save Money With A High Efficient Appliance Install !

A residential heat pump works much the same as your fridge. It uses the special properties of a refrigerant to transfer heat from a heat source to a heat sink in a direction which is opposite to the direction of spontaneous heat flow- heating your home when it is cold outside. It also has a reversing valve which allows it to cool your home when it is warm outside. In an air source heat pumps the heat transferred may be 2.5 times larger at 0 degrees Celsius and 6 times larger at 15 degrees Celsius than the electrical power consumed, giving the system a Coefficient of Performance (COP) of 2.5 at 0 degrees Celsius and 6 at fifteen degrees Celsius, as opposed to a COP of 1 of a conventional electrical resistance heater, in which all heat is produced from input electrical energy.

Determining energy efficiency over a season is not simple. The colder it gets outside the less efficient a heat pump becomes at heating your home. As well, the warmer it gets outside the less efficient the heat pump becomes at cooling your home. The mild, temperate weather of the Lower Mainland makes the heat pump products very efficient at heating and cooling. Still- the price of gas being still about one third of electricity means using a high efficient gas furnace as back up heating when temperatures drop below 0 makes heating with a high end air source heat pump about half the cost of heating with only a high efficient furnace.

Ground water can be used to transfer heat however because of our mild Lower Mainland weather the air is most often used in heat pump applications because of the lower cost of air source heat pump installs even though when air temperature gets low the efficiency follows.

Some of the Premiere Units We Install…

(Install Pricing Does Not Include Furnace or Air Handler) 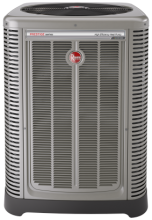 Variable speed unit with up to 20 SEER and 11 HSPF
See Item for more information. 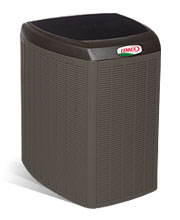 Variable speed unit with up to 23.5 SEER and 10.2 HSPF
See Item for more information. 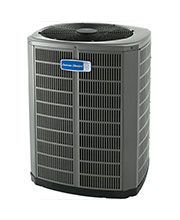 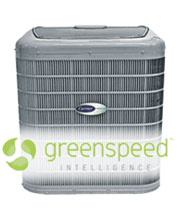 Variable speed unit with up to 23 SEER and 13 HSPF

Central System Heat Pumps and A.C.
Central systems use the ducts of the house to provide heating and A.C. One thing to be aware of is that they will have an achieved energy efficiency ratio 10-20% lower than the nameplate rating due to the duct-related losses.
Heating efficiency for air-source electric heat pumps is indicated by the heating season performance factor (HSPF), which is the total space heating required during the heating season, expressed in Btu, divided by the total electrical energy consumed by the heat pump system during the same season, expressed in watt-hours.

The HSPF rates both the efficiency of the compressor and the electric-resistance elements. The most efficient heat pumps have an HSPF of between 8 and 11.

The HSPF and SEER is related to the coefficient of performance for a heat pump for heating and cooling, which measures the ratio of heat energy delivered or removed to electrical energy supplied. The HSPF and SEER can be converted to a seasonally-averaged COP by converting both the BTU heat output or removal and the electrical input to a common energy unit. Since 1 BTU = 1055 J, and 1 watt-hour = 3600 J, the seasonally-averaged COP is given by: Avg COP = Heat transferred / electrical energy supplied = (1055 J/BTU) / (3600 J/watt-hour) = 0.2928104 HSPF or SEER.

A very important point is that HSPF ratings are made with an electric coil back up. When a gas furnace is used to heat below 0 Celsius the c.o.p values will be higher, and the savings will be much greater. At temperatures over 0 Celsius a good heat pump will have c.o.p’s between 3 and 6 as it gets warmer- the heat pump manufacturer will have this exact info for their different models.

The main advantages of mini splits are their small size and flexibility for zoning or heating and cooling individual rooms. Many models can have as many as four indoor air-handling units (for four zones or rooms) connected to one outdoor unit. Each of the zones has its own thermostat, so you only need to condition occupied spaces. This will save energy and money.

Ductless mini-split systems are easier to install than some other types of space conditioning systems. For example, the hook-up between the outdoor and indoor units generally requires only a three-inch hole through a wall for the conduit. Most manufacturers of this type of system can provide a variety of lengths of connecting conduits, and, if necessary, you can locate the outdoor unit as far away as 50 feet from the indoor evaporator. This makes it possible to cool rooms on the front side of a house, but locate the compressor in a more advantageous or inconspicuous place on the outside of the building. Mini splits also have no ducts, so they avoid the energy losses associated with the ductwork of central forced air systems.

In comparison to other add-on systems, mini splits offer more interior design flexibility. The indoor air handlers can be suspended from a ceiling, mounted flush into a drop ceiling, or hung on a wall. Floor-standing models are also available. Most indoor units are about seven inches deep and have sleek, high tech-looking jackets. Many also offer a remote control to make it easier to turn the system on and off when it’s positioned high on a wall or suspended from a ceiling.